How to Write a Song with AI Generator? Best AI Lyrics Generator

GPT-3 is a lyrics generator that can create song lyrics in any genre. It uses a neural network to generate lyrics that rhyme and have the same metre as the input song. The lyrics are generated by a language model that has been trained on a large corpus of song lyrics.

GPT-3 can create lyrics for any song, including pop songs, rock songs, country songs, and hip-hop songs. It can also generate lyrics in multiple languages, including English, Spanish, French, German, and Portuguese.

GPT-3 is not just a lyrics generator; it can also create melodies and chord progressions. It can even generate entire songs, including the lyrics, melody, and chords.

A new AI tool can write rap lyrics by learning from a database of over 3 million existing songs. The AI, called TTW, is trained on a variety of different rap songs to learn the style and flow of the lyrics. Once it has learned the style, it can then generate new lyrics that sound like they could be from a real song.

The AI tool is still in its early stages, so the lyrics it generates are not always perfect. However, the developers say that it is getting better all the time. They are also working on adding more features, such as the ability to generate rhyming lyrics.

The TTW AI is just one example of the growing trend of using AI to generate music. There are now a number of AI tools that can create original songs in a variety of genres. As AI gets better at understanding and creating music, we can expect to see even more impressive and realistic music being created by machines. 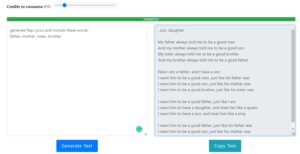 With the AI song generator, you can create songs by simply inputting lyrics and a melody. The software will then generate a song based on your input, using artificial intelligence to choose the right chords and create a unique melody.

The AI song generator is a great tool for songwriters of all levels of experience. If you’re just starting out, it can help you get a feel for how to write a song. And if you’re a more experienced songwriter, it can be a great way to generate ideas for new songs.

Check out these cool examples:

write a few verses with rhymes for a song about love

There’s an app for everything,
For every single task,
And now there’s one for writing,
So you don’t have to ask,

“How do I write a song?”
“What rhymes with this?”
Just open up the app,
And it will do the work.

It’s an AI writer app,
It knows just what to say,
So you can sit back and relax,
And enjoy the show,

It’ll write a hit song,
Or a best-selling book,
Just tell it what you want,
And it will get to work.

write a few verses with rhymes for a song about hate

I wish I could just up and leave
Get away from all this pain
I’m surrounded by so much hate
I can’t stand it, it’s driving me insane

This bloody world around is full of misery and pain

All we ever do is complain

And it never seems to end

We’re just a bunch of animals

And this bloody world is our cage

We’re always tearing each other down

And we can’t seem to get along

We’re just a bunch of monsters

And this bloody world is our home

It’s time to wake up and realize

That we’re all in this together

We need to start working together

If we’re ever going to make it out alive

This bloody world is full of hate

And it’s time for us to change

We need to start loving each other

If we’re ever going to make it

out of this bloody world alive

This bloody world around is so full of crime

You can’t walk the streets without feeling scared

And it seems like it’s never going to end

We’re just living in a world full of sin

There’s no hope for the future it seems

But we can’t give up, we have to keep fighting

For a better world, we have to keep trying

We can make a difference, we can change this bloody world around

This bloody world around is so full of pain

All we do is kill and maim

And we’re tearing this world apart

And in the end, we’ll all be dead

And this world will be nothing but ashes

This bloody world around is such a mess

With all the fighting and the hate

And sometimes it feels like we’re all going to drown

In all the blood that’s been shed

But we can’t give up, we have to keep fighting

For a world that’s worth saving

And someday, somehow, we’ll make it through

This bloody world around us

How to Reword an Essay to Improve Its Overall Effectiveness